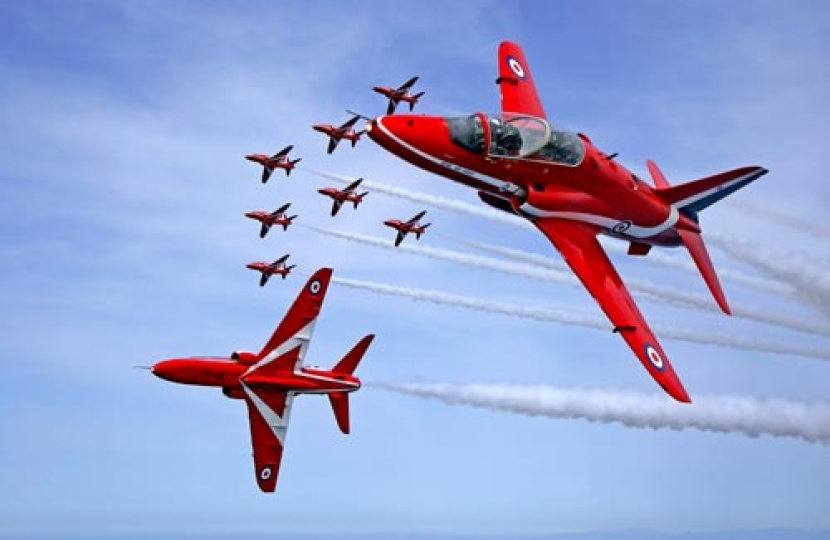 Sir Edward Leigh, the Member of Parliament for the Gainsborough constituency, where RAF Scampton is located, has been saddened by the announcement by the Ministry of Defence at plans to close the base, he said:

“I am saddened by news from the Ministry of Defence that RAF Scampton is to be sold off as part of cost-saving measures.

“The base is home to the world-famous RAF Aerobatic Team, the Red Arrows, the Mobile Meteorological Unit and No. 1 Air Control Centre. With over six-hundred personnel working on the base, including service personnel, contractors and civil servants, the planned closure will have a significant impact on local people and economy.”

The base opened in October 1916 as Air Station Brattleby Cliff before it was renamed in 1918, making it one of the RAF oldest stations. In 1956 the runway was extended by 10,000 feet to allow for the operation of Vulcan Bombers. In 2000, after five years at RAF Cranwell, the Red Arrows returned to the base. Sir Edward continued:

“I have worked tirelessly over the decades to support the historic legacy of 617 Squadron ‘the Dambusters’ to ensure that their contribution is never forgotten.

“I know that the future of RAF bases is always a concern and I have been working with, and will continue to work with, colleagues on both West Lindsey District Council and Lincolnshire County Council to ensure that whatever the future holds for RAF Scampton it has a bright future.

“I will work to persuade the ministry that the base can still retain an RAF function in the future. Should that not be possible perhaps there are civilian uses for the base. I am aware that when the barracks at Grantham faced closure it required significant efforts to put in place transitional arrangements. A masterplan for the base at RAF Scampton could cost millions of pounds to pull together and could form part of any greater Lincolnshire growth deal.”

“We are disappointed to hear the news that the home of the Red Arrows is to be sold off by the Ministry of Defence. The RAF has a rich heritage in Lincolnshire and this news will be upsetting for many people.

“However, West Lindsey District Council is committed to working closely with the Ministry of Defence to secure a sustainable future for the transition from RAF Scampton to another community of our district. This process will be detailed and protracted and we must ensure we do complete this transition sensitively, creating a regulated community where all would choose to live.

“Together with Lincolnshire County Council we look forward to developing a plan for the site to explore the positives to ensure the heritage of RAF Scampton is reflected in future developments that meet the needs of the local economy.”

"I'm sad to hear RAF Scampton will close. Residents must be given the chance to take over assets such as the heritage centre, the shop and gym.

I hope that the future of RAF Scampton can be a blueprint for prosperity following decommissioning, not throwing a community on the scrap heap; like others before.”