Dealing with Reality in Syria 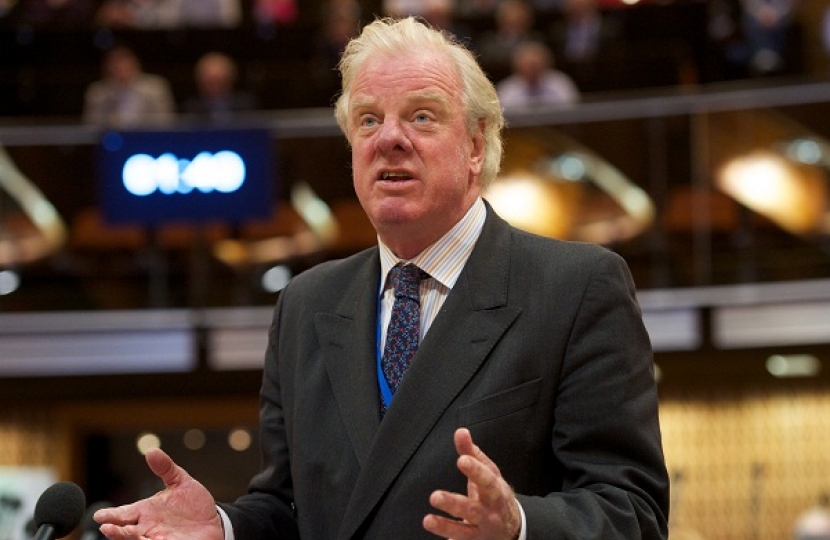 Edward Leigh MP delivered this speech to the Parliamentary Assembly of the Council of Europe.

"With the great cost in human life currently being paid in Syria, there’s no doubt that this is a subject of urgent importance worthy of discussion amongst all European.

"Yet there is a firm reluctance amongst the proponents of liberal interventionism to take into account the reality of the situation we are dealing with in Syria.

"The casual dualistic thinking whereby Assad and his cronies are the big baddies and the insurgents and their allies are the goodies is simplistic folly which must be disregarded by all serious thinking people.

"The regime of Bashir al-Assad and that of his father before him have been responsible for horrendous human rights abuses including arbitrary detentions, deaths, and even massacres.

"The uprising against Assad has been carrying on for over a year now, allowing us an opportunity of observing what life is like in the areas under the control of the Free Syrian Army. It does not paint a pretty picture.
In Homs, home to Syria’s third-largest community of Christians, some churches were forced to abandon their Easter liturgies and services this year for the first time in centuries because of widespread violence against Christians including the bombing of churches.

"Furthermore, units of the Free Syrian Army in Homs are reported to have imposed the jizyah, a tax specific to the non-Muslim subjects of an Islamic state under sharia law.

"The Catholic news agency Fides received word from the Syrian Orthodox Church that 90 per cent of the Christian community in Homs have been forced to flee. Others have been kidnapped with ransoms demanded by the insurgents.

"The Barnabas Fund, a relief agency, has reported that Christians have been used as human shields by the Free Syrian Army.

"If successful, they convince the government forces to rethink an attack. If unsuccessful, which is more often given the Assad regime’s lack of concern for human life, then the insurgents can use the bodies of the human shields for propaganda purposes as civilian dead killed by government forces.

"In April, Msgr Giuseppe Nazzaro, the Catholic Vicar-Apostolic of Aleppo reported an attempted atrocity by the rebels in his city:

“[A] car bomb exploded in the vicinity of the school of the Franciscan fathers. By a miracle a massacre of children was avoided… only because the Franciscans, sensing danger, made the children leave 15 minutes before the usual time.”

"In January of this year, the 29-year-old Greek Orthodox Hieromonk Basilios Nassar was shot dead while giving medical aid to a man who himself had been wounded by a bullet from suspected rebels in Hama, Syria.

"Should the Assad regime, nasty as it is, fall we should then expect hundreds, perhaps even thousands, of such killings to take place – as, indeed, they have taken place in Iraq.

"Christians are currently engaged in almost every aspect of public life in Syria. Can we realistically expect this to continue under an Islamist government with democratic legitimacy?

"Of Syria’s 26 million inhabitants, Christians make up 10% of the population.

"Besides Christians (who are predominantly Orthodox and Melkite Catholic), other religious minorities include Alawites, Shia, and Druze, while ethnic minorities take in Kurds, Armenians, Turkmens, Assyrians, and Circassians. The Kurds alone number over 2 million.

2Syria was one of the first places in the world where Christian communities were formed through the ministry of the Apostle Paul, who was converted on the road to Damascus.

"With increased violence, there’s a danger of Christians and other minorities being caught in the crossfire, and potentially persecuted by both sides in the conflict.

"One medical student at the University of Aleppo told BBC Arabic:

“The University has become a battlefield between the supporters and the opposition of the regime. As a Christian, both sides are suspicious of me. In fact I’m not with or against the regime.”

"Such a quote betrays the reality that, despite the numerous thoroughly contemptible acts of the Assad regime over the decades, it has nonetheless provided a valuable breathing space for people to live ordinary lives.

"We do note, and lament, however, the persecution of the Jewish community in the post-war period, which has resulted in the overwhelming majority emigrating to Israel and the United States. A community of 30,000 in 1948 has been reduced to perhaps no more than a hundred at the most recent estimates.

"Any government that replaces Assad would likely be dominated by the Sunni Muslim majority.

"We do not believe in democracy as a religion but employ it as what has been for us the most useful tool at bringing about a civic order and ensuring people are sufficiently represented in their government.

"We must recognise that, despite our experience as western democracies, we must take into account the experience of other countries, where democracy has sometimes enabled a tyranny of the majority against the minority.

"The Syrians, like all peoples, deserve a chance at establishing a peaceful civic order with eventual democratic prospects, but the democratic principle of majority rule must be tempered by the civic principle of tolerance, respect, and freedom for minorities.

"Otherwise, the majority will eventually find themselves persecuted by their own elites anyhow, thus subverting even their own freedom.

"It is worth looking at the condition of Christians and other minorities in nearby countries that have been subject to flat-footed liberal interventions by Western powers.

"The war in Iraq has led to a significant decline in the freedom and quality of life of Christians in Iraq, also one of the oldest Christian communities in the world.

"Violence against Christians in Iraq has become frequent, and Christian-owned shops and businesses are targeted by violent Islamic fundamentalists. Churches have been bombed, resulting in the loss of many lives.

"In 2010, Edward Stourton of the Daily Telegraph relayed reports of people being stopped in the streets of Mosul by armed men and asked for their identity cards. If their names were of Christian or Assyrian origin, they were shot.

"Hundreds of thousands Christians are believed to have fled the country – some to the United States and Australia, but many to Syria where they believed they would be safe.

"Of the one million Iraqi refugees in Syria, half a million are thought to be Christians. Are we now to deprive them of this safe-haven as well? Many are already fleeing to nearby Lebanon.

"Then there is Libya, where we are now witnessing beatings, abductions, and xenophobic killings.

"The West must begin to acknowledge the pernicious edge of the liberal internationalist foreign policy pursued by some member states of the Council of Europe, but wisely avoided by many others.

"We must remind ourselves that dangers lurk deep within the enshrinement of the rule of the majority without sufficient safeguards reinforcing the rights of minorities.

"Rather than an escalation of the conflict by giving military backing to the Syrian insurgents, we should be encouraging a peaceful negotiated solution whereby Assad can be convinced to share power rather than being replaced and potentially exiled or submitted to trial.

"Everywhere, always, from 1999 onwards, Western liberal imperialist military interventions have been to the detriment of minorities in the countries where we have intervened.

"In Kosovo we have had NATO troops on the ground sitting idly by while churches were burned and monasteries sacked.

"In Iraq we have seen one of the oldest Christian communities decimated by force, intimidation, and violence and increasingly forced into exile.

"In Libya we have seen sub-Saharan Africans abused, detained, and killed and inter-tribal rivalries awakened.

"In the areas of Syria under insurgent control, we have reports of Christians being driven from their homes, being forced to pay the jizyah, killed, kidnapped, detained, and being forced to act as human shields.

"All the evidence suggests that the insurgents are not people who are interested in a tolerant, orderly, representative democracy.

"Defenders of the liberal order need to stop pretending that in supporting the insurgents they are doing anything other than helping propel into power a dark and pernicious band of power-hungry fundamentalists."