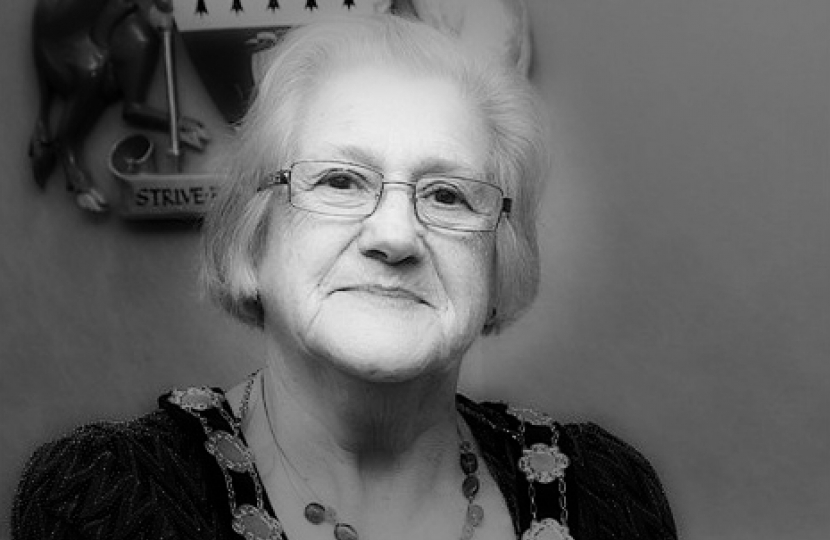 Irmgard was born in 1936 in Austria, where she was raised, often speaking with fondness about the Christmases she enjoyed in her homeland on her grandparents' farm, until she was eighteen years old, and came to Gainsborough, to improve her English. It was there that she met her husband, Len, and never returned home - apart from visits to her family in Austria.

Irmgard first stood as a Conservative local government candidate in the local elections on Thursday, 7th May 1998, in a contest for the Witham Ward of West Lindsey District Council, narrowly being beaten by incumbent Liberal Democrat Stuart Millar, who secured re-election with a majority of just 16 (down from his previous majority of 480). The following year, in an all-out contest, caused by boundary changes, Irmgard was elected on Thursday, 6th May 1999 for the newly created Cherry Willingham Ward, in first place beating Stuart Millar with a majority of 217. Irmgard was subsequently re-elected in 2002 and 2006. In 2008 the Conservatives secured the other seat in the Cherry Willingham Ward and Anne Welburn joined Irmgard on the Council. In 2010 Irmgard was re-elections and in 2011, when the Council moved from thirds elections to regular all-out elections, both Irmgard topped the poll, closely followed by Anne with her majority having swollen to 588 over the third placed, Liberal Democrat. In 2015 Irmgard decided that after sixteen years of continuous service it was time to step down, and hand on to the next generation. Irmgard’s seat was retained by Alexander Bridgwood in the election on Thursday, 7th May 2015 as her successor. Irmgard served in numerous roles on the district council, including as Chairman of the influential Communities and Waste Committee. In 2003/4 and 2013/14 she served as West Lindsey District Council’s Chairman, her husband Len always readily at her side.

Irmgard was a passionate advocate for the district, working hard on the council’s Lincolnshire Show tent for a number of years and the West Lindsey Churches Festival. Mrs Parrott, who served as Lincolnshire Women’s Institute President, and was a popular speaker at venues all over Lincolnshire and beyond. She was the leader of the Market Rasen Sugarcraft Group, an expert at making craft displays out of sugar. Irmgard also served for many years as a Parish Councillor in Cherry Willingham and was Church Warden at All Saints' Church, Greetwell.

In the Queen's Birthday Honours List for 2016 Irmgard was awarded the British Empire Medal for services to the community in Cherry Willingham. Despite the best efforts to arrange for the medal to be specially delivered to be bestowed by the county's Lord Lieutenant, unfortunately, despite the medal arriving in the county, it was not possible to make the award. Her son, Anthony, will, in the future, recieve the award on his mother's behalf.

The civic insignia flag will be flown at half-mast, outside West Lindsey District Council’s Guildhall, in Marshall’s Yard, Gainsborugh, until the day of her funeral in recognition of her dedicated service to the Council.