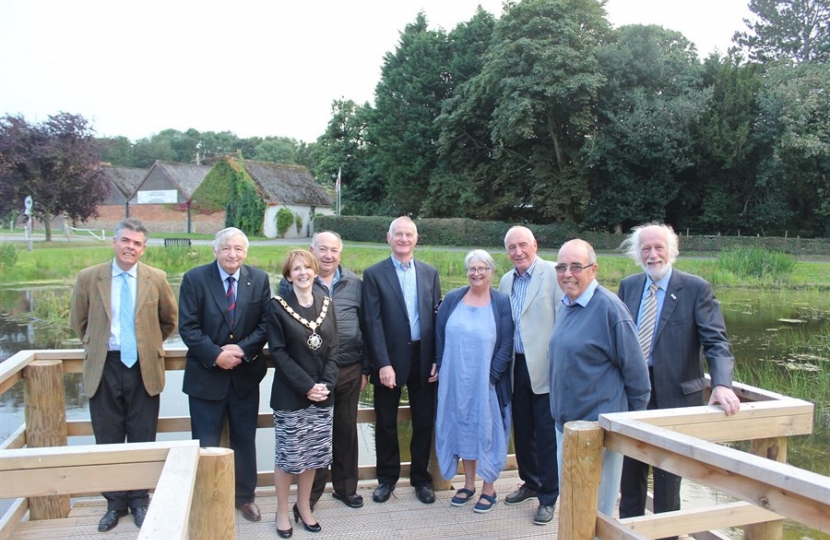 A village pond at the heart of Great Limber has been restored – making it a focal meeting point once again for the community.

Great Limber Parish Council unveiled the space at a special ceremony, where they invited district and parish councillors and residents, to celebrate the work that has been done.

The project was identified by locals during the consultation over the Neighbourhood Plan, which has been adopted. The plan highlighted a range of community aspirations, one of them was to renovate and upgrade the pond area in the village.

Cllr Angela Lawrence, Vice-Chairman of West Lindsey District Council was invited along to the official opening. She said:

“The pond, which is over 100 years old is a focal feature of village and it really does bring the community together. It provides a haven for wildlife and the addition of the benches around the pond, makes it a more usable community green space.

“I would like to commend and thank the parish council who have passionately worked on this for this project. I am pleased that our match funding has helped to secure the grants they needed to complete the work.”

The first phase of the project cost around £30,000 and West Lindsey District Council has awarded almost £3,000 towards the project through its Match Fund Grant. (Other funders include the FCC Communities Foundation (previously known as WREN).

The second phase of the project, which has been complete included work on the footpaths around the pond to improve access. It cost £ 6,750 and West Lindsey District Council has awarded £675, from the Match Funding Grant. Mondegreen EB Ltd also funded the project.

Both the FCC and of the funders awards grants to community projects from funds through the Landfill Communities Fund.

The project came about as part of the discussion around the Neighbourhood Plan. Chairman of Great Limber Parish Council Steve Hudson commented:

“This project came from the community when we were carrying out consultation for the Neighbourhood Plan.  It goes to show it can be used not just to talk about housing but to discuss green and open spaces. The plan was also used as evidence to secure the funding for the project.

“The pond is one of the main spaces around the village, the combination of water and trees at the heart of the village is an area of open space that is valuable to local residents.”