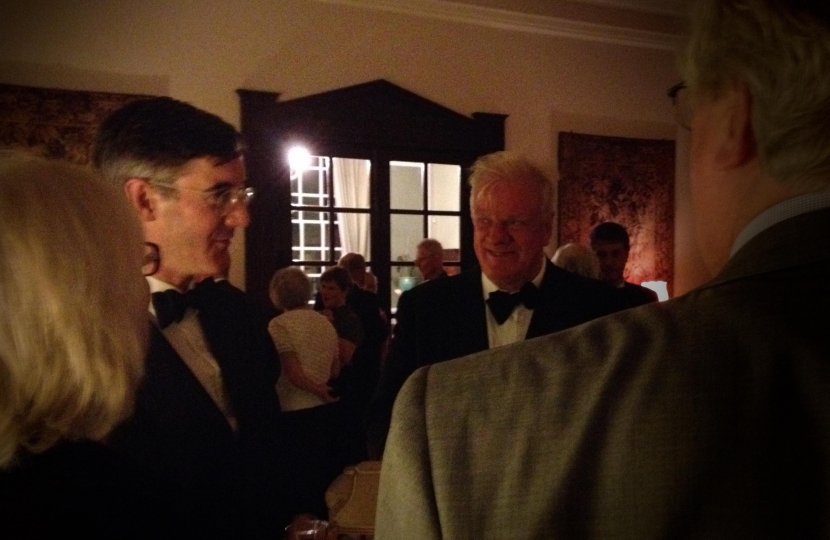 Upon arrival guests, who looked splendid in their evening wear, were welcomed in the Grand Hall by Chairman, Mrs. Stephanie Rouse and Mr. Richard Butroid, Deputy Chairman (Political) and were invited to enjoy a Peach Nectar Bellini cocktail or orange juice in the sumptious surroundings of the Drawing Room.

Mrs. Stephanie Rouse introduced special guest speaker the Hon. Jacob Rees-Mogg who spoke about the historical context and disparity between the English, subsequently British, tradition of the rule of law, mentioning the forthcoming anniversary of Magna Carta and the Fourth Lateran Council, and the continental, European tradition which provides a contrasting relationship between the individual and the state. Following some additional hat-tips to a string of historical moments he concluded that both traditions needed to be respected within the organisational and governance arrangements of the European Union. Mr. Rees-Mogg praised the Prime Minister, David Cameron MP, as a 'wise, logical and capable man.'  He stated that failure to secure a concession of this kind in time for the promised referendum in 2017 could only have one logical outcome; that the Prime Minister would lead the campaign to leave the European Union. Mr. Rees-Mogg also touched on the incompatability of the European Arrest Warrant and the rights enshrined in Magna Carta. He also commented on the approach taken by Conservative Central Headquarters in dealing with the difficulty poised by the United Kingdom Independence Party (UKIP) and the history of right-wing insurgencies - which head to the left and their consistant failure to succeed; noting that fundamentally the Conservative Party is inherently conherent as a philosophical, political and ideological endeavour in a way the UKIP is unlikely to ever become. Mr. Rees-Mogg took questions from Cllr. Summers, Mr. McNeill, Cllr. Patterson, Mr. Speer, Mr. Denby, Mr. Sunderland and Mr. Butterworth.

Sir Edward Leigh proposed a Vote of Thanks remarking that, whilst their had been press speculation about all three parliamentarians attending the dinner defecting to UKIP, it was not sufficiently 'right-wing nor thatcherite enough for us.' Mr. Rees-Mogg recieved a standing ovation from the guests at the dinner, who had clearly been particularly impressed with his address. Mr. Rees-Mogg departed shortly thereafter.

Guests were invited to bid on a number of auction items that had been donated to raise funds for next year's General and Local election campaigns and buy tickets for the Grand Draw. After a throughly enjoyable evening the event broke up around half past eleven.