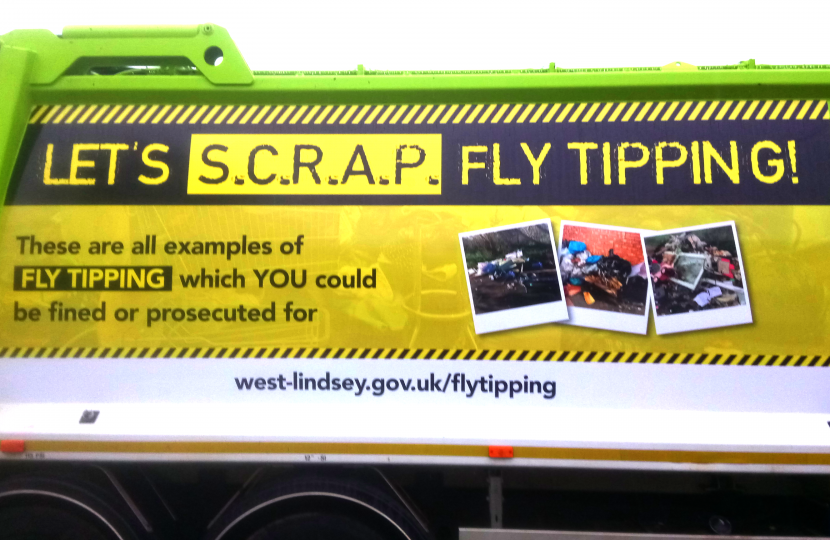 Lincolnshire has launched the SCRAP fly-tipping campaign today which aims to fight the blight of fly-tipping in the county and cut clear up cost.

The campaign reminds people to check their waste is being taken away for disposal by a licensed carrier – either by asking to see a Waste Carriers Licence or by looking up the company on the Environment Agency website.

“Fly-tipping is illegal, unsightly and pollutes our environment. There are lots of ways that people can legally get rid of the things they no longer want, so in addition to asking people to avoid giving their waste to rogue traders, the SCRAP campaign will be highlighting how people can dispose of items and stay within the law. We’re urging people to follow the simple SCRAP code and are reminding people that if it’s their waste it’s their responsibility.”

People can avoid an unlimited fine by following the SCRAP code:

All of Lincolnshire’s councils, the Environment Agency, Lincolnshire Police and Crime Commissioner are joining together to support the SCRAP fly-tipping campaign. SCRAP is based on an award-winning and successful campaign continuing to be developed by the Hertfordshire Waste Partnership and its partner authorities, with more joining all the time.

“The Environment Agency advises both businesses and the public to check on its website to see if a company or individual removing their waste has a waste carrier’s licence. They should also ensure that the waste is being taken to an authorised site. We work with our partner organisations to prevent, disrupt and investigate large-scale illegal dumping - any fly-tip that is ‘larger than a tipper load’ - or if the waste is hazardous or linked to organised crime.”

“Fly tipping is a terrible blight on our countryside and our communities and I fully support the council in its proactive campaign to tackle this problem. It only takes a few seconds to check if a waste carrier is legitimate but that few seconds can make a huge difference in time, cost and damage.”

For more information about the campaign, fly-tipping and legal ways to get rid of unwanted items, visit: www.lincolnshire.gov.uk/recycle.